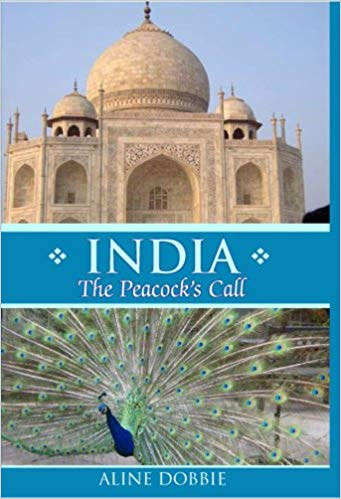 India is the land of my birth and the India: The Peacock's Call details my thoughts and emotions on my return at India's half century of Independence with which my age roughly coincided. My memories of India are vivid as up until March 1963 it was my home, therefore I write about modern India as well as recalling childhood memories.

The fundamental essence that is India is its eternity and I attempt to describe it simply. Where appropriate I detail the history of the place I am visiting, or give its specific background. I talk of the flora and fauna and the seasons, food and shopping and socialising.

I travelled with my husband and we visited places on the well trodden tourist route and several that are not. We stayed with Indian friends and because of my past were given opportunities to do a few unusual things, such as visit the Indian Army on three occasions and participate in the celebrations of the festival of Holi.

I am grateful to Martin who said these kind words about my book and journey.

The Anglo-Indian relationship is a love affair that did not end with divorce. Long after Partition and Independence, it has endured into the twenty-first century. It seems that the British and Indians, bound by the ties of history and language, retain a certain natural affinity. It is not an uncritical relationship: sometimes we exasperate and chide each other, as we might a wayward relative. But there is a mutual fascination always, and never a moment of boredom.

It has sometimes seemed to me, in my own travels in India from Simla to Poona and from Bombay to Calcutta, that the Indians are more British than the British. This applies especially to their military culture. If you seek the distillation of Britishness, visit an Indian Army barracks. Aline Dobbie was born in one, or close by. Her father Colonel Frank Rose, was a British officer in the IXth Jat Regiment of the Indian Army at Bareilly in Uttar Pradesh. He had earned the admiration of his men by leading a daring escape from Singapore as it fell to the Japanese in 1942.

Aline Dobbie left India at the age of 16 and returned 35 years later. India: The Peacock's Call is the chronicle of her return. It is more than a travelogue. It is the account of a personal pilgrimage - not so much a journey abroad but a return home.

It is written with grace and affection and a deep understanding of the Indians and their culture. She clearly belongs to the great tradition of indefatigable lady travellers who acquire their history by visiting it: through north central India, from Rajasthan to Uttar Pradesh, one feels that there is hardly a temple or citadel left unvisited. Calcutta and Mumbai (Bombay) are also on the itinerary.

Where a hotel's service is less than perfect, which is most rare, or she finds a place she doesn't like (also a rarity), she is not afraid to say so. Her husband, Graham, on his first visit to India, plays an intriguing walk-on part. What is sometimes alarming to him is reassuring to her. She especially admires the Indians' dignity even in the most adverse circumstances.

Her book serves many purposes, not least to whet the appetite for a passage to India. There are many who will wish to follow her footsteps to some of the lesser-known destinations. India: The Peacock's Call, is an excellent travel guide for those who would venture beyond the beaten track. It is also a rare book of discovery.

Described as "a charming eye opener" and "recommended to any European who is planning a long holiday in India" you can read more about the reviews at:

What to expect in the book

I speak Hindi/Urdu and this made my encounters more interesting. Throughout the book I have shown my love for India, but without glossing over some of the huge problems that assaulted the eye everywhere one goes. It is a beautiful fascinating country with warmth of hospitality particularly when the visitor is recognised as someone who is enjoying being there - not simply a curious demanding tourist doing the superficial tourist route.

There is gentle humour but I do not seek to demean or belittle those I encountered. In fact when I mention that I was born there the inevitable answer is "Well then you are Indian!". Quite often I was introduced as "Half Indian..." or "she was born here, she is one of us..." this was meant as a compliment and valued as such and provided opportunity to experience and write about modern-day India with all its complexities in greater depth.

We travelled independently having made the arrangements privately within India. We travelled by car, train and plane from Delhi through Uttar Pradesh, Rajasthan, Madhya Pradesh and West Bengal and Calcutta with a brief two visits to Mumbai.

I detail the history and background to Fatehpur Sikri; the Bishnoi - tribal inhabitants of Western Rajasthan; Deeg and the history of the Jat people; religious beliefs such as that surrounding the Kala Mati Rat Temple at Deshnok near Bikaner; detail on Madhya Pradesh; Calcutta's history; the Moghul rulers and their achievements and the impact and relics in and around Agra; most notably the Taj Majal.

Photography is my art form and I took a full pictorial record of the three week trip which encompassed all the above mentioned places, plus the return working trips. Through my photography you can view India's people, tribal life, village life, middle class life, privelleged life, wildlife, sunrises, sunsets, ancient buildings, palaces, temples, gardens, flora, fauna and festivals. Click here to view my albums online.

How to buy the book

Alternately it is available from all good bookshops- just ask for: