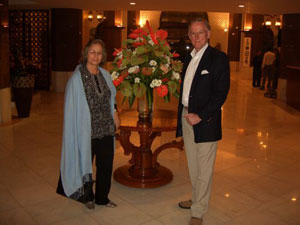 Having been invited as a guest of the Government of India to attend the Republic Ceremonials Graham and I flew out on the 24th of January.  What a pleasure it was to find ourselves again in Delhi.  This was a Delhi bustling with anticipation for the following day’s great parade and celebration of the country’s anniversary of Republic Day.  The security was immense and as we were staying at the India International Centre it was something we encountered from the moment of arrival.  Sadly these days with so many intent on evil destruction both the civilian and military arms of government have to take immense precautions which were evident around the wide lovely roads of New Delhi.

On Republic Day we left the IIC at just after 0800 hours so that we would have plenty of time; as it was the streets and roads were oddly quiet because of the security and the fact it is a national holiday.  What I liked was seeing the various young contingents being ‘bussed’ in or walking in columns to the Rajpath area from which they would march or perform for the VIPs and spectators.  It was fortunately a lovely morning with early sunshine – at that time of year Delhi can have quite a few foggy mornings but Friday the 26th saw a blue sky and sunshine and Delhi looking lovely in the winter colours of annual flowers on the roundabouts and parks and Lodi Gardens plus a few spring blossoms on the big trees.

Our car was subjected to a most intense search and then sealed.  We walked to the Ambassadorial Enclosure where we were to sit.  It was beautifully laid out with carpets and elegant seating and a profusion of elegant flower arrangements and carefully staged bunting and the Republic of India’s National Flag.  Very sadly, because of the stringent security, we were instructed not to bring anything at all with us but passports and the invitation which meant I could not actually photograph the parade as it unfolded in front of us. 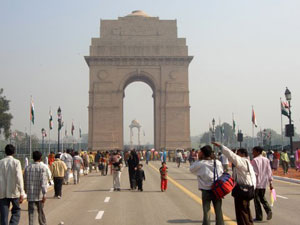 The Parade takes quite a long time and I had wondered typically what people would do for ‘conveniences’?  Well that had been factored into the logistics naturally and one could see how it must take quite a long time every year to assemble the whole structure and cater to masses of dignitaries plus the ordinary loyal Indians who would come to rejoice on one of their National Days.

We were met by the Chief of Protocol and invited to sit in the front row of seats between Ambassadors from Ghana and other African countries.  There was a red carpet in front of us and the barrier was about 10 feet away.  A little to the side of us was a group of chairs that were totally different from ours and very soon it appeared that this was for the Russian contingent.  President Vladimir Putin was the Guest of Honour and naturally he had brought along a delegation of Russians.  As well as looking at all that was going on around me with smart generals and military personnel arriving I observed the Russians closely.  What a cheerless bunch they proved to be.  Not a smile or a polite greeting to anyone.  Their body language signalled that they were totally unimpressed, did not want to be there and how would anybody consider a bright sunny day sitting on the side of Rajpath about to witness one of the world’s truly great parades an enjoyable thing to do!

The Diplomatic Corps on the other hand greeted each other and us and were friendly and warm and guess what, used their ‘diplomatic’ skills for which they are chosen to represent their respective countries.  Then an American high ranking diplomat arrived along with his relatives.  He looked slightly miffed that the front row was taken and spied the chairs of the Russians and without thinking decided his party would sit there.  The Protocol Chief looked dismayed and had a discreet discussion with a colleague – meanwhile we all observed the dilemma with amusement.  He went up to the American and said something like ‘Excellency please would you move from these seats’ and gesticulated to the rows in which we were seated.  The American lounged back in his seat and said audibly ‘Why, these seats are good I like it here…’ to which the Chief of Protocol hissed ‘you are sitting amongst the Russians….’  Well!  He leapt out of his seat and walked off followed by his relatives.  The Russians continue to scowl and all of us laughed.  The various ambassadors found it a huge source of mirth. 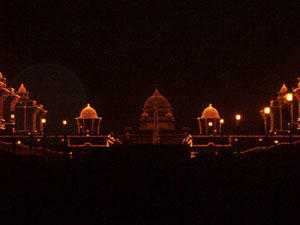 The Parade and spectators were showered by Rose petals by Indian Air Force helicopters and the various regiments of the Indian Army paraded past.  It should be remembered that the Indian Air Force is celebrating 75 years since its inception. There was a huge amount of military hardware also used in the parade and since quite a lot of this had been ordered from Russia presumably the Russians were pleased to see it.  Certainly to my irritation one Russian looked at nothing but took a continuous photo of the whole parade – how I wish I could contact him for a copy!  There were Mounted Columns of Cavalry, Mechanised Columns of tanks and Bofors guns and Launchers and Light Helicopters; these were followed by Marching Contingents of the PARA Regiment, the Brigade of Guards, The Rajputs and then very emotionally for me my late Father Frank Rose’s Regiment The Jats.  I was born at Bareilly in the military hospital – a child of Independence – and have returned three times within the last decade to Bareilly the Jat Regimental HQ.  Captain Sumit Dabral commanded this contingent from the Jat Regiment which was raised in 1795; the Regiment has taken part in action in post and pre Independence periods.  The Battle of Dograi fought by the regiment in 1965 has been accepted by analysts as the finest battle fought by an Infantry Battalion.  This regiment has been awarded five Battle Honours, eight Maha Vir Chakra, eight Kirti Chakra, thirty-two Shaurya Chakras and thirty-nine Vir Chakras and 170 Sena Medals. 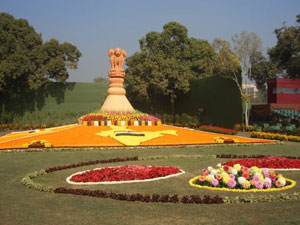 The Border Security Force Camel Contingent was superb; under the command of Deputy Commandant Kamal Singh Rathore these ships of the desert are dependable companions in the inhospitable terrain of Rajasthan and the Rann of Kutch.  The camel-mounted troops have been instrumental in successfully tracking down smugglers and extremists in the Rajasthan and Gujarat frontiers.  They were followed by the only band of its kind in the world – the Border Security Force Camel Band.  Raised in 1986 by the Rajasthan and Gujarat Frontier Force it is now a permanent feature in all Desert and Marwar Festivals.  This was a most wonderful sight.

At this point I observed the Russians had started to become animated and point and smile and enjoy the spectacle.  To see a bunch of normally looking disdainful camels being made to ‘march’ and then the band actually playing on another contingent of marching camels was a rare sight and so colourful.

The Indo Tibetan Border Police marching contingent in alpine dress known as the ‘Himveers’ attired in snow combat dress guard the highest and most inhospitable borders in the world and it was a reminder of their lonely duties to see them in Delhi on the Rajpath in white dress uniform with skis on their backs. They play a vital role in India’s defences. 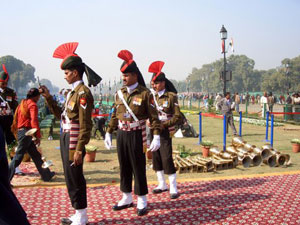 When the Cultural Pageant started it too was most interesting and I was so pleased to see Uttarakhand’s display of Corbett National Park.  The tableau projected the vital importance of conservation of wildlife, the emblematic animal of India is the Tiger, followed by the Elephant and of course the national bird – the Peacock. Jim Corbett was a family friend and it was good to see his vital role in the initial stages of conservation being recognised.

The Children’s National Bravery Award Contingent was also breathtaking; all these little heroes and heroines were riding on caparisoned elephants.  That too was amusing in that the mahouts had to really make those elephants ‘march’!

On a sombre note Teja Sai received the Sanjay Chopra Ward posthumously as did Durga Doondieswar.  These two brave youngsters in 2005 were on an organised picnic from their school when during play a ball fell into river Munneru in Andhra Pradesh and some of the students tried to retrieve it and were in difficulties.  Seeing the plight of their school mates Durga Doondieswar and Teja Sai jumped into the river and managed to save four children and in the process the strong current washed them both away.  They gave their lives for their playmates and have been duly recognised.

At the head of the elephant contingent was Kum Vandana Yadav from Uttar Ptradesh who had received the Geeta Chopra Award; while in the fields with her brother, Vandana valiantly resisted three young men who tried to molest her.  She was stabbed in the process but thankfully lived and the assailants were caught with the help of nearby people.  She led the proud band of Brave Children and received most enthusiastic applause.

Something dear to my heart was the Stree Shakti – Empowering Women tableau.  This is the programme of the Government of Delhi aimed at the empowerment of women in the capital especially those belonging to the weaker sections of society. The tableau portrayed the success stories of the women in various areas of the capital where they have proved themselves worthy and active stakeholders in the development of the city.

We found the parade immensely interesting and at times profoundly moving; it is a credit to the Armed Forces and the Civil contingents and as a ‘Child of India’ there was much for me to feel proud of and to wish India success and happiness for all her peoples for the future.