Leaning out from the Jeep, looking down at the very fresh pug marks of a tiger made the hair on my neck stand up. I looked around as the peacock continued his shrill alarm. The sambar too was 'belling' and alerting the jungle that tiger was on the move; I chanced to look behind and there she was, a wonderful tigress crossing the track about thirty feet away! 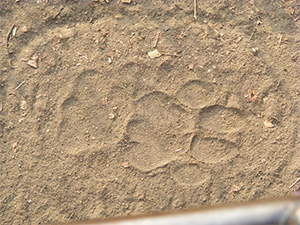 The sheer beauty and the thrill of seeing this magnificent animal made one almost shiver in the cool morning air, the sun had not yet fully risen and the mist was still low over the glades and elephant grass.

The naturalist and driver were very excited and we saw an elephant approaching at speed; we beckoned urgently but soundlessly. The mahawat urged the great beast into the jungle and we debated what to do. Meanwhile the jungle calls were adding to the sense of anticipation and excitement. Providentially - perhaps the Tiger God was smiling on us - another elephant appeared and the mahawat quickly realised we needed his jungle transport. With great speed, the adrenalin pumping, we leapt from the jeep's roll bar on to the elephant's howdah and she sped off in pursuit into the forest. What ensued was amazing; the tigress did not leave the area and we came face to face with her and then she turned and pounced. There followed a short desperate scream and the tigress stood looking at us with the body of a chital fawn in her jaws. Chital, the spotted deer are a favourite prey for tigers and the little one had obviously been abandoned by his panicked mother and had hoped to save itself in the long grass. The tigress regarded us steadily for a few moments then bounded away. We were spellbound and returned on the elephant to the track. I patted the elephant and noticed her most wonderful eyelashes - they are about two inches long. Patiently she stood and let me talk to her at her eye level, as I was by now standing in the Jeep.

Be it in Ranthambhore (where incidentally there are no elephants), or Bandavgarh where this incident took place, or Kanha or Pench or Corbett there is the thrill and anticipation of seeing the king of the jungle. Sometimes however they see you and you are not as fortunate. Go and enjoy India's great wildlife parks and have an ear and an eye open for all the creatures, be it a small sleepy looking owl to a solitary leopard high on a rampart looking down at you in the dawn light. Chital stags battling for territory, kingfishers of all sizes, serpent eagles, nilgai and sambar deer, wild pig, peacocks strutting in a jungle glade, porcupines, jackals, a sloth bear if you are very lucky, all these and much more will make a visual feast. In Kanha you will see gaur, the huge bison with horns, and barasingha the swamp deer. As well as all the animals the birdlife is immense and very beautiful.

India has the highest number of migratory bird species of any country in the world. Go to Keoladeo Bird Sanctuary at Bharatpur, which is just inside the border of Rajasthan. No motorised transport is allowed inside the park so one either walks, or more sensibly hires bicycles or is carried in a cycle rickshaw. Our rickshaw wallah was so knowledgeable and fun to be with and I wrote of him in my book India: The Peacock's Call. Kanha is considered to be the king of the parks and one can understand why, it is huge and very well maintained. We were very fortunate and also saw a tigress from elephant back at Kanha. Pench has now become accessible to the travelling public and is quite easily reached by flying into Nagpur and then travelling by car for a couple of hours. Pench still retains my ideal of animal watching, few people with lots of opportunity for the dedicated wildlife seeker, but with simple and adequate accommodation.

There are 500 national parks and wild places in India, but in the long run unless there is a more integrated conservation policy these will be substantially subsumed by population pressure. It requires us all to be proactive and help exert pressure on expedient politicians to ensure these wonderful wild places are conserved and enhanced, so that the tiger, emblematic of India, a glorious animal is allowed to live in the wild and thrive, admittedly not in the numbers it once did.

Each park has its own specific attractions in terms of topography and flora and fauna for one to see. All of them have that intrinsic beauty of a wild special place with peace and tranquillity. By mid November the elephant grass is in flower and looks quite superb, a sea of waving white and silvery plumes in a jungle savannah with a herd of chital grazing. A jungle pool within a quiet glade and a tiny kingfisher about his business; stop be still, and let the magic of India's wild places enter your heart.