No wild tiger is safe in India

These were the words of Belinda Wright spoken to me on the telephone from Delhi.

Whilst tigers are seen as ‘walking cash registers’ because of the value of their skins and body parts for the Tibetan and Chinese peoples, who greedily and cruelly have no sense of responsibility, they are in extreme danger from poaching. Poachers receive up to £10,000 for a tiger skin and £3,000 for a kilogram of tiger bones, used in traditional Chinese medicine.  On a programme screened on BBC recently in The Natural World Series Sir David Attenborough talked of the extreme crisis in tiger numbers throughout India’s wildlife parks.  Taking part in the programme were Belinda Wright, Valmik Thapar and Rahgunandan Chundawat; all courageous stalwarts in the struggle to save the tiger.

Belinda once again emphasises that India desperately needs a Centralised Wildlife Crime Bureau that can co-ordinate the urgent work of detecting and punishing all those involved in this vile trade. It would seem that “the tiger is vanishing and no one is listening” said Hashim Tyabji, one of India’s veteran tiger watchers and a conservationist. “Official numbers have been fudged for years, hiding the true extent of the crisis until now.” 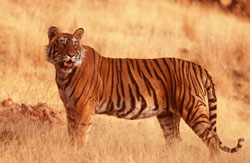 The tiger numbers are down 70% since 2002 (which is when I researched my second book India: The Tiger’s Roar).  I was led to believe that population pressure was the great threat but in fact the corruption and poaching that has been hidden from the world’s eyes is the most serious cause of the fall in tiger numbers. Under Indira Gandhi Project Tiger saw their numbers rise from 2,000 to 4,300, but now it is calculated that perhaps only 500 tigers are left throughout India.

Wildlife Protection Society of India is Belinda Wright’s brainchild through which she has worked with huge energy and commitment to try and help save and conserve India’s tiger population.   In June 2006 it had been announced that the Indian Army would be enlisted to help to protect the tiger population, giving soldiers the power to arrest or even shoot poachers on sight, said Kalpana Palkiwala, the spokesperson for the Ministry of the Environment.  There is now even talk of allowing Tiger Farms within India, but this is in emulation of the Chinese and really quite a shameful idea in that by thinking in artificial terms the Indian Government is almost admitting defeat in its half hearted attempts to continue to save the tiger in the wild. 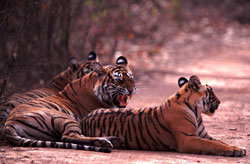 Valmik Thapar who has with equal commitment and energy devoted himself to trying to save tigers said, when questioned recently, the tragedy that has befallen the tiger is that 40,000 tigers existed within India at 1947 and now, at India’s 60th anniversary of Nationhood, there are barely 500.  He urges that politicians must educate themselves about India’s wonderful natural world and realise that 600 rivers and streams start their journeys in tiger country – that impacts on everybody; greedy developers would destroy India’s whole eco-system if allowed. Politicians must realise the world will condemn them if India’s magnificent national animal becomes extinct because of their inertia or greed. The villages within national parks should be relocated and compensated and the forest guards must be trained and armed and given back up to combat violent ruthless human predators and given public recognition for their dangerous work.

It also behoves the Indian Diaspora all over the world and other caring people to show their disgust at this appalling lack of energy and commitment.  India wants to be seen as a responsible forward moving nation, particularly in this her special anniversary year; she must act decisively with regard to her wonderful emblematic animal the Bengal Tiger; show the World what can be achieved and earn universal respect, relief and approval. 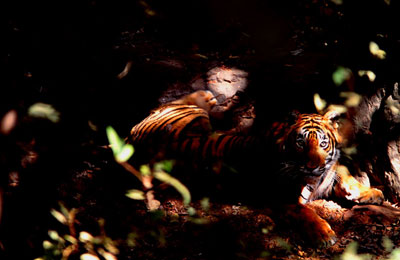 In the new Saving Planet Earth television series Sir David Attenborough and Alan Titchmarsh brought tigers to our attention once again.  Fiona Bruce, the BBC television personality made her first journey to India and visited Bandhavgarh National Park where to her obvious delight and excitement, and some apprehension she witnessed tigers in the wild and was totally captivated.  Dr Ullus Karanth the dedicated naturalist explained in conversation with her how the current dire situation could be reversed.  This is something we can all make happen with pressure and donations to the various organisations.

Hopefully now, yet again on the brink of extinction, the Tigers of India will be saved.

You can support Tigers at: