This powerful film we were privileged to see in a private view on Tuesday 3rd December in Glasgow.  I recommend it strongly to everyone. 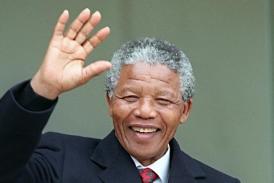 My most favourite film is Gandhi…..because of my birth and life in India and Gandhiji was a great influence on Mandela and now this film, thankfully out in his lifetime, shows Nelson Mandela and his strength of purpose, resolve and commitment to gaining democratic freedom for his African brothers and sisters.

I first went to South Africa in end of January 1970 and was aware of all the challenges but had newly married.  By 1972 I entered opposition politics in which I played an active part until my departure in 1979.  It was the sickening events of June 1976 which finally made up our minds that this country would not change in our lifetime and we could not be part of it.

Subsequently events became even more brutal and vicious but then the world reacted and it became obvious that when it came to the South African debt rescheduling they would not receive any support and the country was close to bankruptcy.  Ever practical the Afrikaner Government had to work with Mandela and freed him.

His long walk to freedom was lonely but so courageous and it is just wonderful that he found Graca Machel as a companion in his very senior years; this is a film that is a must see for one and all.  I just wish that the ANC would watch this and reassess some of its values….. 20 years on corruption, greed and discrimination were no part of Mandela’s vision of a just and free South Africa.  I salute the man and his wisdom and wish he had been President for two terms – much of what has happened since may not have occurred.

Now 48 hours later I have heard of Madiba’s passing with grief but also relief for his peaceful end.  A great soul will now shine on us from above, truly he must be one of the two greatest men who lived through the 20th century and him into the 21st century….may we all remember his credo of tolerance with humility and courage with commitment.