Christmas and New Year in Mumbai 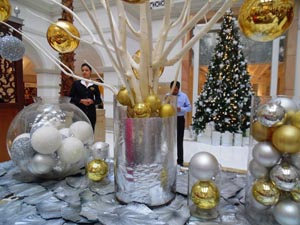 We arrived in Mumbai on 23rd December and enjoyed the Emirates flight from Glasgow to Dubai.  I was not however impressed with the second flight from Dubai to Mumbai and we arrived late.  It was with a jaundiced eye therefore I viewed Mumbai's Chatrapathi Shivaji airport.  Let us say the airport is good....I had not seen this new one before.  However the sheer incompetence of the minion handing out the mandatory landing form to be then signed was disgraceful.  Hitherto these forms were handed out on the flight and one had time to fill it in neatly sitting in the airline seat...no more it seems.  So tired harassed arrival passengers then have to grapple with finding a surface on which to fill out the form accurately.  We are used to it, you should have heard the impression  it made on first time arrivals.....said one 'if this is what the rest of this trip is going to be like....you can keep India, I won't  recommend  it....'

Then the immigration control desks were manned by two thirds LESS staff than should have been the case.  Thus the queue lengthened drearily.  The staff did they smile or wish Oh NO, fancy being welcoming to India what a stupid idea.  One decided to get up and leave....two at least great aircraft disgorging their load of passengers and that is the competence of Mumbai's international airport.......a nightmare at 0830 hours.

Thankfully for us the efficient ITC Maratha Hotel staff collected us in a sleek Mercedes and in four minutes we were being warmly welcomed to a beautiful hotel.  The Maratha is really three minutes’ drive from the airport thus the transfer is so speedy.  Warm welcomes, beautiful suite, gracious surrounding, and a fine late breakfast. .......and the familiar happy feeling of being back in the Land of my birth returned. ....Beloved old Bharat.....but truly blast Babudom!

We spent Christmas at The Maratha which has such splendid restaurants, leisure lawns, gracious lounge, tea lounge, Spa, and swimming pool.  The sleek Mercedes took us to shops at Juhu........which I of course enjoy but Graham dutifully endures!

Then we made the journey into the city again in the powerful car expertly chauffeured and paid a visit to Mani Bhavan.  I have been to the Birla House in Delhi and the Sabarmati Ashram in Ahmedabad but had yet to visit Mani Bhavan.   I was mindful that a century ago Gandhi was living here in this house having returned from South Africa on 9th January 1915.  That was really the start of the Freedom Movement and so many historic events took place in Mani Bhavan.  It is well kept and I found it immensely moving.  That balcony on which he stood, looking at the rooms in which he lived, the mosaic tiled floor, similar to those I recalled from my childhood in India  .......it really was special.  Mumbai the ever sprawling city of great wealth and great poverty, what would Bapu think of modern India a century on from his return.  I pondered it all. I don't  know is the answer but I do know he would want the poor not to be disrespected and disregarded.........modern India has to grasp the great challenges  of her ever burgeoning cities and conurbations because these people's  aspirations and dreams are not anywhere near being realised....the breeding  ground for unhappiness  and unrest.

We then drove to The Gateway of India and strolled around.  There is a degree of security post the Tragedy of 2008 ...... and it was good to feel the pulse of this city.

ITC Maratha made strenuous charming friendly efforts to celebrate Christmas and we enjoyed ourselves as we had participated in our own family celebration the previous Saturday in Scotland.

On 26th December we said farewell to this gracious hotel with its excellent service and glorious amenities and went to The Leela nearby.   It was the first of The Leela hotels started by that great Indian the late Captain Nair.  It too is very pleasant indeed, but the welcome was in different vein and didn’t really quite measure up to The Maratha's.  However, having demanded a room change we then went and explored and found a most lovely pool.  Life at The Leela was very comfortable and their management changed the gear and we spent New Year there very happily.  It has the most splendid swimming pool and surrounding area that makes one think this is not Mumbai!

We had a lovely New Year’s Eve Dinner in their Jamavar Restaurant with an Indian Banquet.   We strolled around and watched others quaffing alcohol but it is not what I do these days.  We went to bed just after midnight.

The sunrise of the New Year of 2016 was lovely from my suite and I had the prospect of a lunch with our good friends from Marex Media that day and New Year in India!.   A beautiful ten days spent in Mumbai…..but the rest of India awaited and we flew off the next day!