Englishwoman besotted with the country, recounts her memories of 1962 India

Born and brought up in India, Aline Dobbie’s fascination with the country remains unabated as she talks about her love for its vibrant culture and childhood days here. 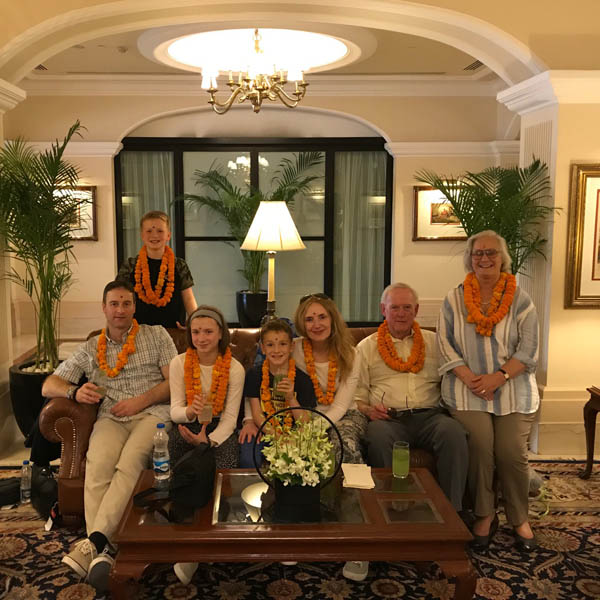 "Can I have meetha nimbu pani," requests Aline Dobbie as she settles for a quick chat that turns into an almost hour-long conversation at Hotel Imperial’s 1911 Restaurant.

She is fresh out of another interview and looking forward to joining her grandchildren at the hotel’s pool where she is staying with her brood.

Dobbie was recently conferred The Art and Culture Award from The Indian Awards 2019 by the India Business Group, for outstanding contribution towards promoting goodwill between India and the UK, and for being an ambassador of Indian tourism, and she is back in the country she calls home.

Here for another holiday, this time she wants her children and grandchildren to see India from her own prism, the India that has always left her mesmerised, visit after visit, the India she has written extensively on. As she sips on her drink, the first question understandably is what really fascinates her about the country. “Everything. It’s the land of my birth.

I may not be Indian but I might as well be,” Dobbie says fondly. She was born in Bareilly, where her father was an officer in the Indian Army. Having spent the first 16 years of her life here, she grew up speaking Hindi and Urdu. “My father was a hero of the Indian army. Mother too loved India. While my grandfather was distinguished with Lawrence of Arabia in Mesopotamia, great grandfather had been a general and was a friend of Maharaja of Patiala. So, with a background like that, you are bound to fall in love with India,” she says.

Her time in India was no less than a young hero. At the young age of 16, Dobbie was tasked to run the evacuation of tea garden personnel out of Assam during the 1962 Sino-India War. “I did some grown-up things rather young,” she says, reminiscing the time that she describes as a rather interesting one. “My uncle, who was the director at Williamson Magor said to me ‘Aline, I want you to come and organise the evacuation.’ We worked with the Indian Air Force, trying to bring people out, and then you had to find accommodation as there weren’t many hotels,” she recounts.

After a gap of 35-years, when Dobbie came back to India in 1997, she continued the journey to discover India and soon had enough material to write her first book- India: the Peacock’s Call, followed by India: The Tiger’s Roar and India: The Elephant’s Blessing. She has another book that is yet to see the light of the day. “It was commissioned in Scotland but six weeks before it was due to be launched it became obvious that the man had run out of money. Now the book is still waiting to be published,” she chuckles, adding that she would love to be published by an Indian publisher.

“It’s about India and my journey around India from 2008 to 2018. The other books have covered the years before,” Dobbie informs. Unlike other travel books, what sets her apart is that her work doesn’t tell you what to do and where to go, she speaks about India with affection and knowledge, giving one a potted history of the places she talks about.

Except for the Northeastern side and the far north, Dobbie has covered most of India over the years. When she came back after more than three decades, she was able to see the place in a different light and admires the change. “Nothing stands still; you would either regress or progress. That’s the way of life but you want to do it responsibly and not be over controlled,” she says philosophically.

“It’s great to see India changing. The average Indian wants to see his life improve. Nothing gives me great pleasure than to see a fellow herding buffalo talking on a cell phone. You can have a better business when you have connectivity,” she goes on the say, recalling how trying to get a landline in India during her young days was a “nightmare”. Here for few months, she will soon be heading to Rajasthan and hopes her grandchildren will be able to sight some tigers the way she did.